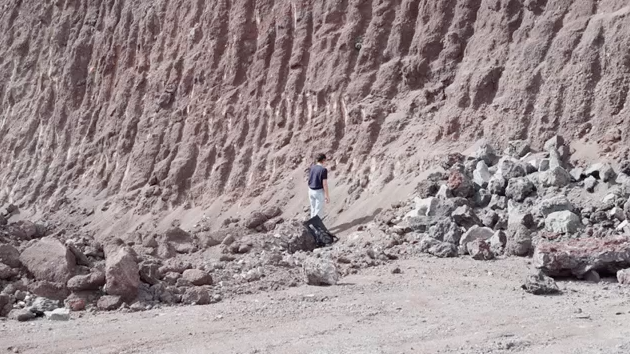 The story of the snow geese became the starting point for an interdisciplinary collaboration between nine artists. The project consists of three parts: a collection of poems in the spring, a concert in the summer and finally a film in the winter: Kobalt.

Together with a number of musicians, Constanze Wouters went to a stone quarry in Germany, a place that rhymes with the image (Het Debuut) of the mine where the geese died. The impressive quarry provided many ideas for Constanze and the musicians, who wanted to record the sounds of the mine.

A place under civilization, under a city and a forest. Stretched out, bald and bouncing.

‘Kobalt’ is an observation of the silence in the quarry. It demonstrates how sound, without a score or composer, can still become music.

* A thousand geese end up in a snowstorm during their summer migration. They were forced to retire above Montana. The group of geese land on a lake adjacent to a copper mine. The water is full of toxins that give the geese no chance of survival.

// PERSPECTIEF in collaboration with HET DEBUUT //

Het Debuut is a young collective that offers professionalising artists presentation opportunities. They unite various makers within the contemporary artistic context. Commissioned by KOP and based on the philosophy that there are still things that make each other possible, they organize the art trajectory PERSPECTIEF.