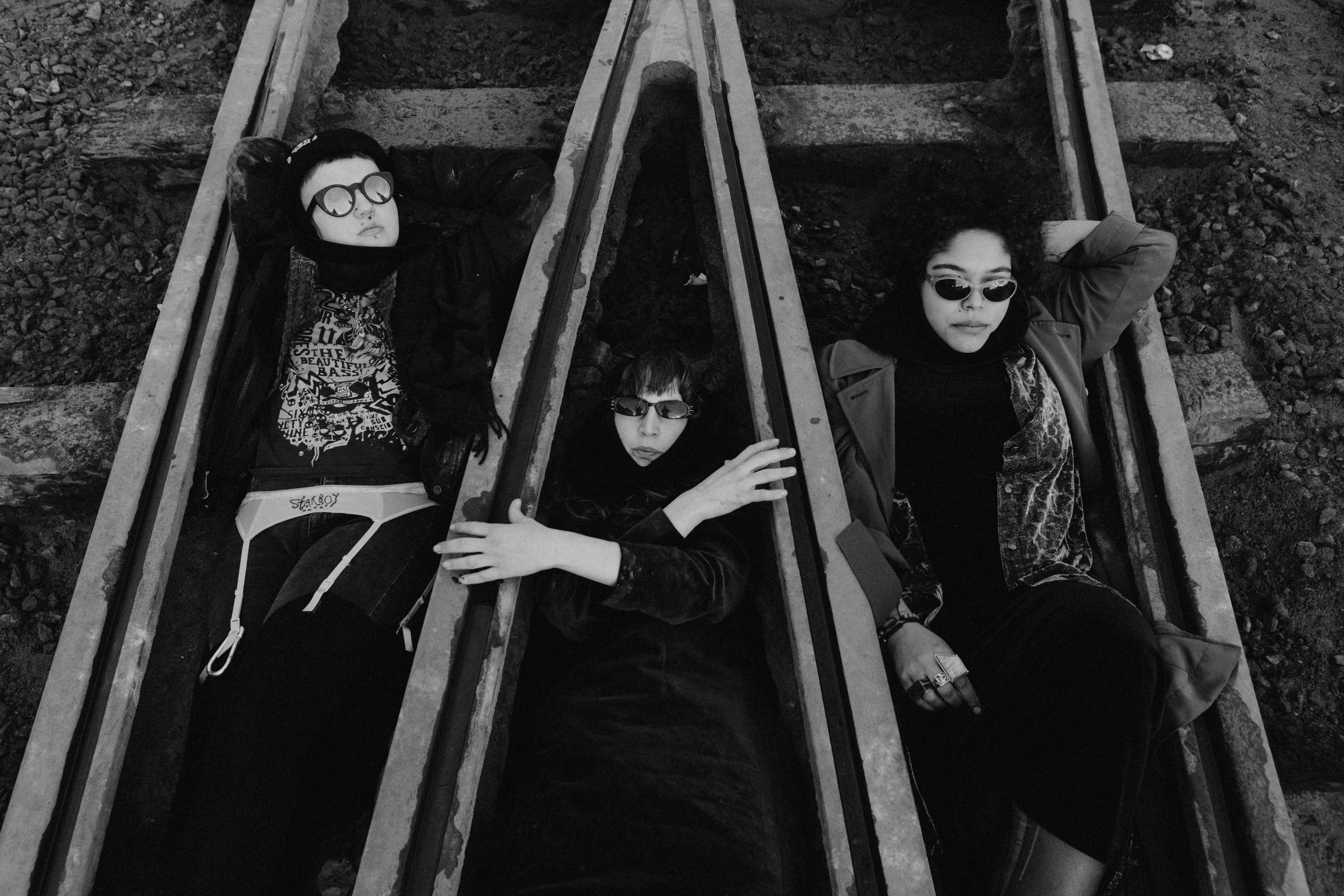 The collective seeks to define the elements of Kafka’s verses into a performance, which will be one of an eight-part series, based on the works of the writer. Intrigued by the emerging transitory human condition that impedes many of us from actively committing to something, a specific event in time and place, they want to give the audience the opportunity to consciously observe, experience and reflect. Alongside, the performance flourishes a narrative that combines their individual influences, art forms and craftsmanship.

How did you meet each other?

MATHILDE: Daphne and I met a couple of years ago by chance. I was visiting a friend from Bruges, who was complaining that she didn’t know any of her housemates. So we decided that we would invite the next person walking through the door to join us for a drink. And that was Daphne.

DAPHNE: The next day we started working together. Mathilde modelled for me for a couple of shoots and we kept on collaborating. Nathan is following an Erasmus exchange program at St. Lucas and that’s where we met.

How does the plenitude of art forms influence the collaboration?

NATHAN: The cool part about this collaboration is that we’re all so different. We all have our own stories and a shared understanding of what we’re doing, which transcends all the differences.

DAPHNE: Even thought we come from different backgrounds, we had no difficulty in finding a mutual foothold and decided early on to work on a performance. And we are all in the same headspace, which makes it easy to contribute to one cause.

Although it’s still a work in progress, could you tell us about the project:

MATHILDE: We don’t want to say too much, but the starting point was a story by Kafka called At Night written in the 1920’s. It’s a short story, just a couple of sentences long, and you have to read it about a hundred times to genuinely get the impression right. The main idea is the performance, meaning that when people come here they are in the moment with us. We want to tell them something about the kind of response Kafka’s story elicits and how we feel about life in general.

NATHAN: The performance is about committing to being present in the moment. Proposing the idea of when you’re having a performance you need to be in that space to experience it fully.

DAPHNE: Because images or videos don’t actually express or document what is happening at that moment.

NATHAN: It’s like a commitment. I feel it’s a thing of our time to say that you’re going to an event but still keep your options open. It’s sort of like an active commitment to say there is this performance and I’m going to be there.

MATHILDE: We really want to give the audience a sense of the impact of that fleeting way of dealing with accountability.

DAPHNE: Also the idea of capturing time by creating a space where it can stand still. Especially nowadays, when everything moves so quickly. Everything passes by and it seems like nobody is really listening or thinking. Furthermore we wanted to see how the text relates to the present.

In what way do you relate to Kafka’s story?

NATHAN: The source text was also created in a time of political uproar, when a lot of things were happening. We wanted to pick that energy up again to look at current events and have a discourse or a dialogue about these elements and how we put them to work.

MATHILDE: Kafka was always about loneliness and watching people. The short story also talks about the importance of observing people from the outside in.

DAPHNE: A motif we also wanted to incorporate in the performance in the portrayal of an observer. We still have to figure some things out, but we also want to use video as a way to communicate with the audience.

On a general level, how do these artistic alliances help to overcome the challenges of starting artists?

MATHILDE: I always think that if you really want something, give everything and believe, then you will meet the right people and get lucky. That’s also a very important aspect about these communal spaces, where you can find like-minded people.

NATHAN: Also in general, wherever you are, when you create your own movement with your own space, you become more independent and can always rely on you own strength. Because there are certainly some limitations with gallery spaces, politics,… These community-based independent art spaces also have a strong uniting factor. Being in the same space with the right people, creating a shared thing, just becomes a great opportunity.

After completing their visual research during their residency in the KOP artspace, the artists will perform during the opening on the 18th of May.